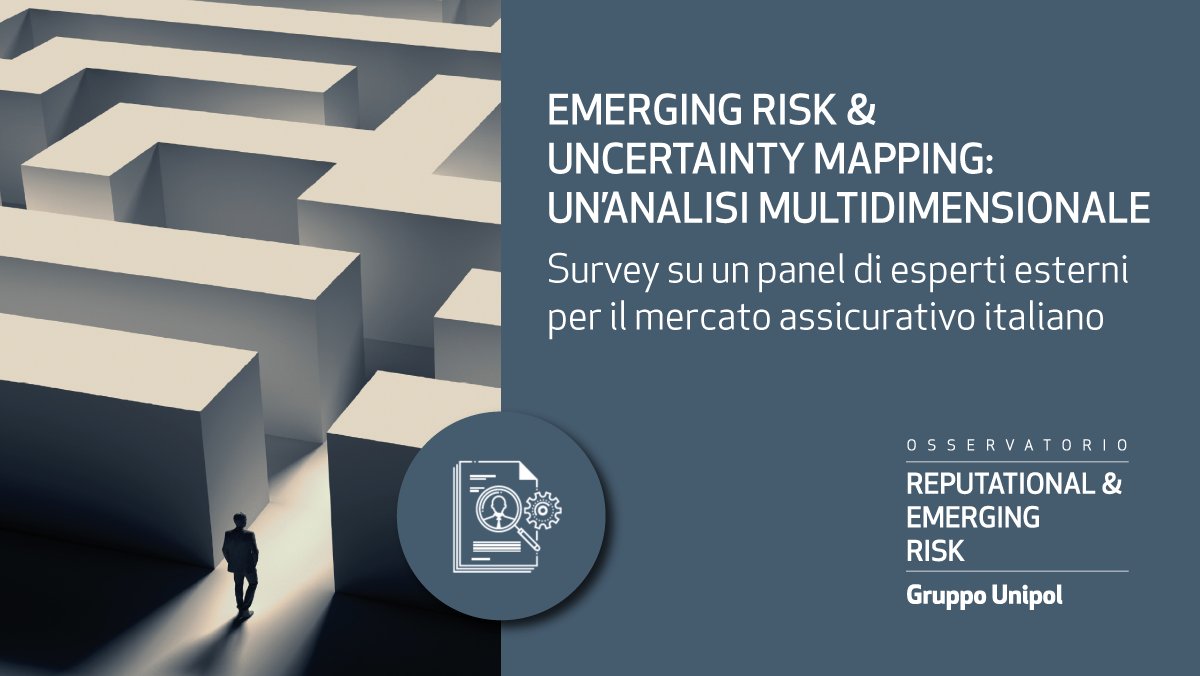 Six emerging areas of risk have been identified by the Reputational & Emerging Risk Observatory on the basis of a systematic analysis of 16 macro trends currently on the Group’s radar.

In keeping with its approach to listen to what’s happening on the outside, the Observatory decided to explore the 6 areas of risk, setting up a panel of outside experts for each cluster from the world of academia, research centres and opinion leaders.

They made their contributions through a survey aimed at finding out the time period, the probability of occurrence, the potential impact on the Italian insurance sector and the interconnection of the risks.

The integration of the various visions and the different viewpoints allowed us to create a map of the set of emerging risks for the Italian insurance sector. This is shown in the new Observatory Paper in order to share the results that emerged so that the level of preparation and resilience to the main challenges that will arise in the future can be reinforced.

Increase in the frequency and impact of natural disasters linked to climate change with a consequent increase in physical losses for the Group and the policyholders. The serious physical risks arise from certain phenomena, especially weather-related such as storms, floods, fires or heatwaves.

Increase in the frequency and impact of natural disasters linked to climate change with the consequent increase in physical losses for the Group and the policyholders (Events becoming more persistent). The persistent physical risks arise from longer term climate changes such as temperature changes, rising sea levels, less water availability, the loss of biodiversity and changes in the land and soil productivity.

Failure to manage risks linked to the transition towards a low carbon footprint economy with consequent exposure to stranded assets or areas of business and exposure to reputational risks.

Risk of a significant biodiversity losses and the collapse of natural ecosystems (land and sea) with significant impacts on the environment, health, food security and economic activities.

Risk of pandemics or contagious illnesses, explicit and implicit in the portfolio, worsened by increasing resistance to medicines and antibiotics and also linked to the effects of climate change and the loss of biodiversity. Pandemics can have impacts on the various lines of the insurance business and on investments through impacts on financial markets, work organisation mechanisms, supply chains and on customer behaviour.

Unsustainability of business models with long-term exposure to risk and based on the model of traditional families. Significant increase in life expectancy with impacts on the sustainability of the risk taken on, also due to the high rate of illnesses in the oldest members of society. Impacts also on managing staff in terms of attractiveness and retention of new skills.

"Massive increase in morbidity, neurodegenerative illnesses and mental illnesses, also due to pollution, the loss of biodiversity and resistance to antibiotics and medicines, and due to the impact of technology. The United Nations expects that Covid-19 will reverse decades of improvements in healthcare, interrupting immunisation, cancer treatments and putting resources for the treatment of a number of health problems onto the long finger. Impacts on both customers and on the “human resilience” of the Group (attention to the health and psychological-physical wellbeing of the employees)."

Use of weapons of mass destruction, conflicts between countries, terrorist attacks, increasing protectionism due to changes in the international order an an increasingly multipolar world.

Violent social conflicts: social rage episodes and political instability due to the increasing social polarisation (between generations: young people, a new lost generation, between genders, in terms of digital literacy and skills, etc.) and the increase in the number of people living in poverty. Failure to monitor financial inclusion, i.e. the ability to make the products and services for all segments of society accessible, understandable and financially sustainable.

Transformation of the insurance base and assets to insure

Difficulties in managing the transformation of the insurance base and the change in assets to insure (transfer from ownership to access, circular economy, less tangible assets and more intangible assets such as reputation and data). Medium-long term reduction of the traditional car business and property business. Self-driving cars with impacts on the risk profile for many insurance business lines.

Lack of new skills to manage the new emerging macrotrends and new crossover skills such as managing complexity and multiculturalism. Need to transform human resources to adopt new skills. Difficulties in managing human resources due to older workforces and higher levels of diversity to capitalise on (by generation, gender, educational and cultural background).

Disintermediation of the relationship with the customer due to both digitalisation and technology (for example blockchain) and increasing P2P confidence and customer empowerment. Legacy of the network of agencies and IT systems. Development of service ecosystems that go beyond the traditional borders of businesses and markets with potential disruptive effects on the business models and the risk of being excluded from the phases with the highest added value.

Increase in cyber risk due to increasing digitalisation and an increase in the availability of devices for cars, homes and people (health management devices). Cyber attacks and loss or theft of data.

Lack of data governance with a consequent loss of control over customer relations in a context where customers are losing loyalty and requiring increasingly personalised services and new ‘non-insurance’ players are establishing toeholds (banks, postal services, technology companies, etc.), acting as intermediaries in the relationship with the customer and accessing the data.